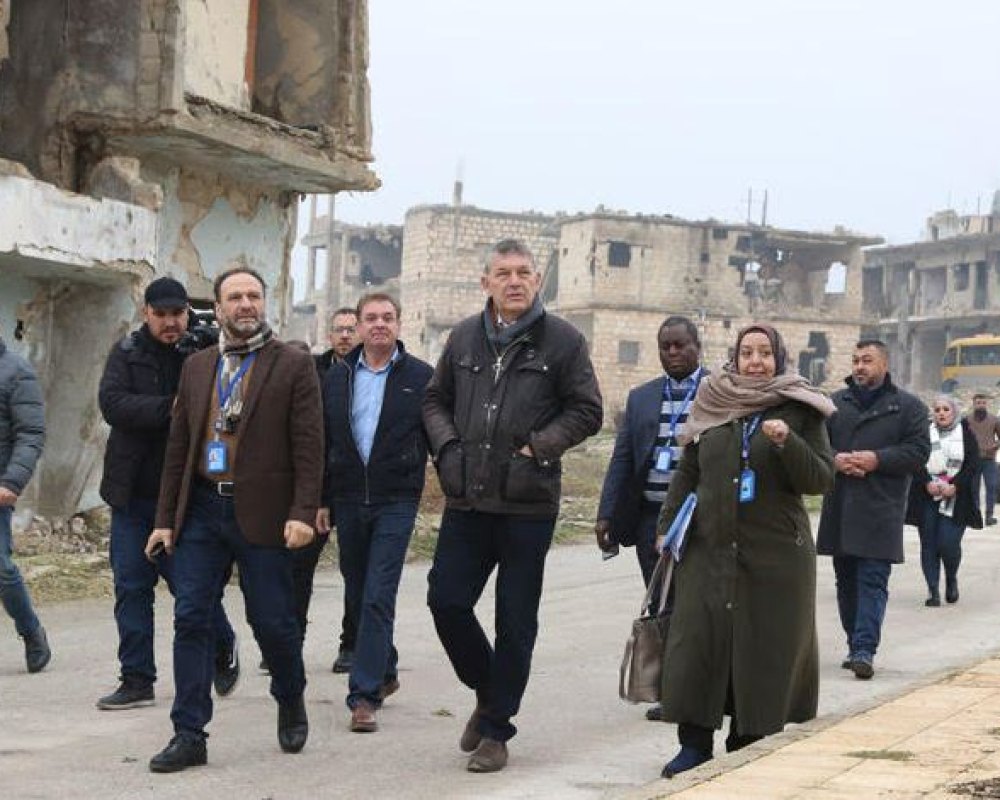 United Nations Relief and Works Agency for Palestine Refugees in the Near East (UNRWA) Commissioner-General Philippe Lazzarini visited Syria from 15 to 19 January 2023, to meet Palestine refugees and Agency staff in Aleppo and Damascus. Together with the Director of UNRWA affairs in Syria, Mr. Amanya Michael Ebye, Mr. Lazzarini engaged with the communities in Neirab, Ein el Tal and Yarmouk camps, and held meetings with senior government officials.

During visits to Neirab and Ein el Tal camps in Aleppo, young Palestine refugees who study in UNRWA schools and vocational centres spoke about their eagerness to learn and find employment. Young women and men from the UNRWA vocational centre asked for courses in the English language and software and applications development to catch up with 21st century labour markets. All of them asked for common workspaces with electricity and internet where they can study after school.

Students in UNRWA schools described their efforts to mitigate bullying, including through raising awareness, encouraging discussions and increasing access to sports and hobbies. They asked for more playgrounds to keep their peers busy with sports and play.

“Meeting young people whose families lost everything could have been only a depressing moment," said the Commissioner-General. “Instead, these girls and boys and young people articulated themselves with so much energy and drive that I could see how far they could go if they received a small push. Like their peers everywhere in the world, these children crave learning and fun opportunities, they hope for better futures.”

Discussions with representatives of the Palestine refugee communities of Neirab and Ein el Tal showed the scope and scale of the hardship of the refugees in and around Aleppo. Their requests for very basic needs ranged from milk and diapers for babies to supporting cancer patients with treatment.

Mr. Lazzarini visited a family in Neirab camp in a home that now enables the access of a disabled grandmother.  The home modification support project is implemented in partnership with UNDP.  He also visited a family in a house that will undergo minor repairs by UNRWA in Ein el Tal. In both cases, the refugee families showed immense gratitude that they have a place they call home. Both, however, lived in abject poverty.

During his visit, the Commissioner-General met with the Minister of Foreign Affairs and Expatriates, Dr. Faysal Miqdad, the Governor of Aleppo, Mr, Husien Diab, and the Director-General of the General Authority for Palestinian Arab Refugees (GAPAR), Mr. Qasem Hussein. He briefed the government officials on the Agency’s relentless efforts to mobilize additional contributions from donor countries to help respond to acute needs such as the ones he witnessed in Syria.

“I was shocked by the level of destruction of houses and UNRWA premises in some Palestine refugee camps in Syria. UNRWA installations must be rehabilitated to provide services to refugees who have returned. This is happening in Yarmouk camp, thanks to funding from Spain, Italy and Japan. I was very impressed with the work done to rehabilitate two buildings that will host a school, a health and a community centre.  I want to express my solidarity with the community and admiration for their persistence and strength in difficult times when they have lost everything.”

Lazzarini thanked UNRWA staff in Syria for their incessant strength and dedication despite the daunting challenges they continue to face.

“I will continue to advocate for the Palestine refugees of Syria and call on donors to enable the repair of shelters, UNRWA schools and other premises. The near-total destruction of places such as Yarmouk and Ein el Tal caused unimaginable suffering. Undertaking repairs even if minor and making some of the basic services available will go a long way in instilling a sense of dignity and hope among Palestine refugee communities in Syria.”

UNRWA operates in the West Bank, including East Jerusalem, The Gaza Strip, Jordan, Lebanon and Syria.

Tens of thousands of Palestine refugees who lost their homes and livelihoods due to the 1948 conflict continue to be displaced and in need of support, nearly 75 years on.