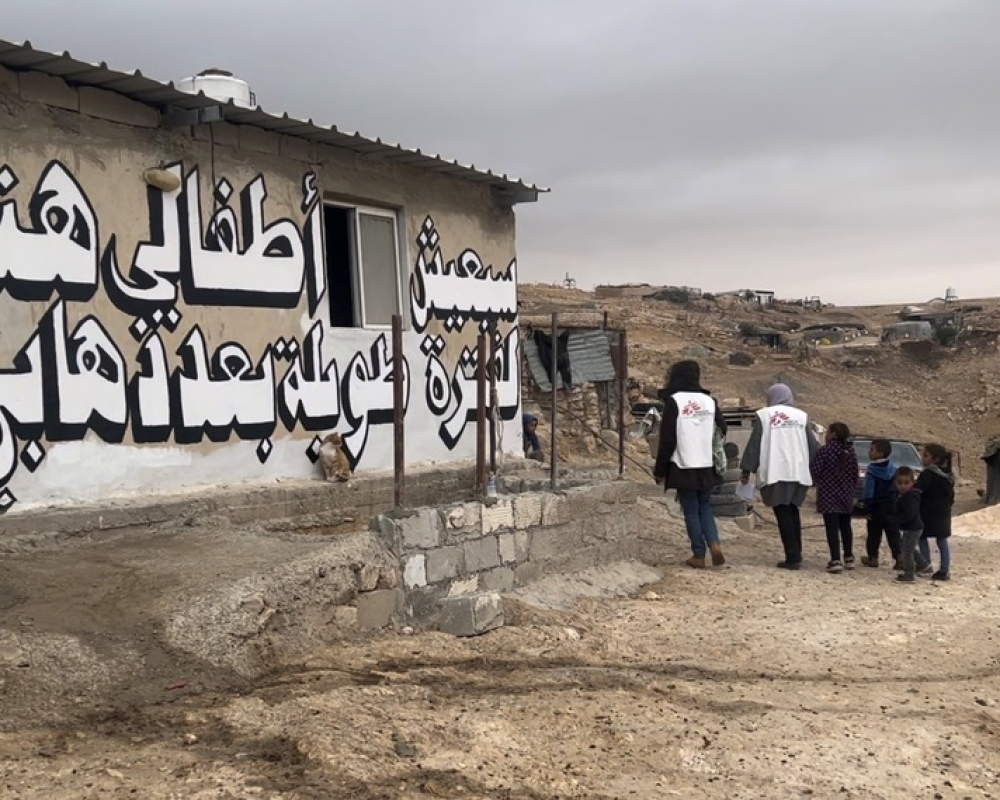 Occupied Palestinian Territories, 19 January 2023 – Some 1,000 Palestinians are to be evicted from their homes in the Masafer Yatta area of the West Bank, according to a plan approved by the newly sworn-in Israeli government. The move has been strongly denounced by the international medical organisation Médecins Sans Frontières/Doctors Without Borders (MSF), whose teams provide medical care to the area’s residents.

“This plan would mean the imminent forcible displacement of almost the entire population of Masafer Yatta,” says MSF head of mission David Cantero Pérez. “Where are all these families to go? This is completely unacceptable.”
In the 1980s, Israel designated Masafer Yatta, south of Hebron, as a military firing zone. In the decades since Palestinians living in 12 villages scattered across the region have seen their homes repeatedly demolished and have lived under the threat of forced displacement.
Their situation deteriorated yet further in May 2022 following a ruling by the Israeli Supreme Court which removed all legal barriers to the forced displacement of Palestinians from Masafer Yatta to make way for the military zone. Palestinian officials confirmed that, as of January 2023, most of the residents of Masafer Yatta had received demolition orders and are at imminent risk to be forcibly displaced.

Israeli authorities have put extraordinary pressure on residents of Masafer Yatta to leave the area. As well as demolishing people’s homes, they have installed checkpoints, confiscated residents’ vehicles, and enforced curfews and other movement restrictions. These measures, which have intensified in recent months, have severely impacted residents’ freedom of movement, mental health and ability to access basic services, including medical care, say MSF teams working in the area.

Sick and elderly patients report being made to wait for hours at checkpoints and being forced to walk long distances to reach clinics. Residents’ movements are restricted even during medical emergencies. “You have to be on the point of dying to be allowed through the checkpoints,” one resident told MSF staff.

“These measures have severely affected the residents of Masafer Yatta and made their lives unbearable,” says Cantero Pérez. “They live in constant fear. The mental health impact on residents, particularly on children, cannot be understated. In periods where more home demolitions occur, our mental health team receives more people with symptoms of depression and anxiety.”

One elderly woman described to MSF staff the moment that Israeli authorities came to demolish her home for the fourth time in two years: “I felt like I was suffocating, like I was blind, like my hands were tied. My children were in school when the demolition started, they came out to watch. They were in shock, in complete silence.”
Another resident told MSF: “They choose the winter for demolishing houses. Tonight, our family will sleep in the car, or in a tent in the cold. It’s going to be 5 degrees Celsius tonight.”

MSF teams run three clinics in the Masafer Yatta area, providing residents with basic healthcare. This includes mental health support and sexual and reproductive health services, with a focus on women, children and patients with chronic diseases. In 2022, the MSF team provided 3,066 medical consultations in the area.

MSF calls on Israeli authorities to bring an immediate halt to the eviction plan and to stop implementing restrictive measures that impede the ability of Palestinians in Masafer Yatta to access basic services, including medical care. MSF also calls on the international community to take all necessary measures to protect the population of Masafer Yatta and ensure that their human rights are upheld.

“The whole world should know what is happening to us,” one resident told MSF staff. “All we want is to live on our land, in our homes.”