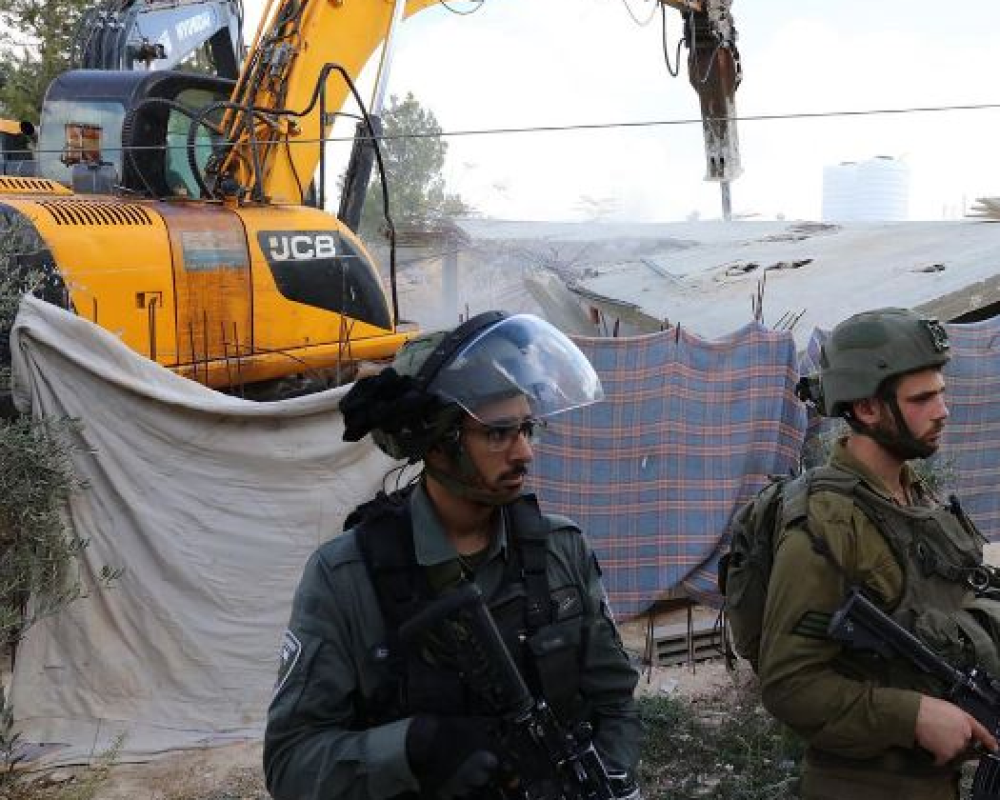 Israeli forces Wednesday morning demolished an agricultural room and a livestock farm in the occupied West Bank districts of Qalqiliya and Bethlehem, according to local sources.

They said that an army force escorted a bulldozer into Nabi Elias village, east of the northern West Bank city of Qalqiliya, where the heavy machinery tore down an 90-square-meter agricultural room belonging to Mohammad Ghashash, purportedly for being built without a rarely-issued license.

Meanwhile, Israeli troops, accompanied by a bulldozer, stormed the western part of al-Khader town, south of the southern West Bank city of Bethlehem, and tore down a 150-square-meter livestock farm belonging to Khayri Sbeih, citing the same pretext as a reason, according to the town mayor, Ibrahim Musa.

Musa added that during the confrontations that unfolded, the soldiers showered local protestors with volleys of tear gas canisters, causing dozens to suffocate.

Located 4 kilometers to the west of Bethlehem city, al-Khader has a population of some 12,500 and occupies a total area of 8,280 dunams, 85.5 percent of which are controlled by Israel.

Since the start of the Israeli occupation of the West Bank in 1967, like so many other villages in Palestine, al-Khader has been subjected to almost continual land theft for Israeli settlements, bypass roads, and military installations.

Israel has constructed Efrat and Neve Daniyyel colonial settlements on an area of 6,329 dunums of Palestinian land, including a portion confiscated from al-Khader. It has also constructed a section of the apartheid wall, isolating some 5,620 dunums of the town’s land for colonial settlement activities and pushing the villagers into a crowded enclave, a ghetto, surrounded by walls, settlements and military installations.

Israeli refuses to permit virtually any Palestinian construction in Area C, which constitutes 60 percent of the occupied West Bank and falls under full Israeli military rule, forcing residents to build without obtaining rarely-granted permits to provide shelters for their families.

In contrast, Israel much more easily gives over 800,000 Jewish Israeli settlers there building permits and provides them with roads, electricity, water and sewage systems that remain inaccessible to many neighboring Palestinians.

‏Adam Ayad, a new Palestinian civilian victim of an Israeli sniper who is not held accountable