Despite Israeli aggressions: Palestinians hope to live in peace during their Christmas celebrations 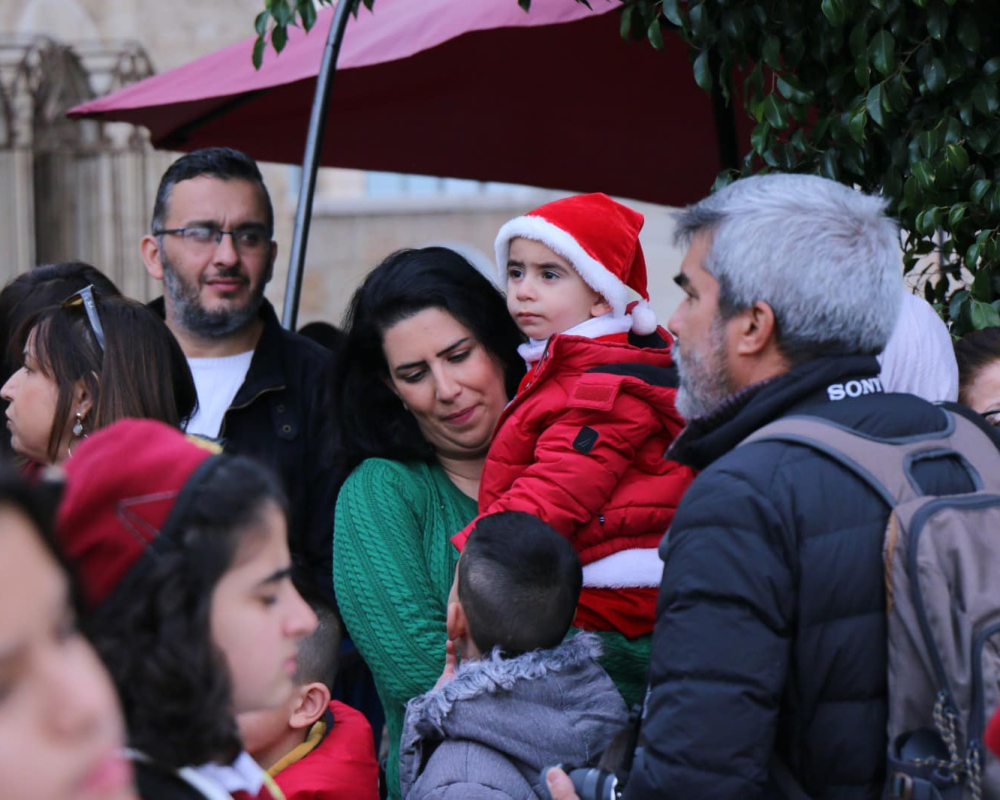 Palestinian people، celebrated the glorious Christmas ، as the celebrations were concentrated in the city of Bethlehem, which received the rapidity of the Latin Patriarch ، of the City of Jerusalem ، amid hopes of changing political and economic conditions

Maher Qanawati member of city council told PNN that the message of Bethlehemis and Palestinian to the world send is a message of love and peace, despite all the pressures we face due to the measures taken by the Israeli occupation army and the attacks carried out by settlers in the vicinity of the city.

Qanawati said that Israli occupation forces storming the city, arresting young men and children, killing some of them in addtion to land confiscation to build settlements and the city is besieged adding that Israel also violates Palestinians prisoners rights.

He said :"We hope that the message of the Palestinian people will reach the international community and intervene to stop the human rights violations committed by Israel in the holy city.

Every year, Palestinians are counted in the holidays, carrying messages of hope for justice and peace, and they always hope that the new years will be better off despite the pain and constant aggression

Dr. Ramzi Khoury, Chairman of the Supreme Presidential Commission for Church Affairs said that their efforts focasing to preserve the Christian presence in the Holy Land, especially Bethlehem and Jerusalem, in which Israel adopts repressive policies to displace Christians from Palestine.

Dr. Mustafa Barghouti General Secretary of the Palestinian National Initiativetold PNN that we as Palestinians, are required to benefit from the Christmas spirit and unite our efforts a year after Israel escalated violence against the Palestinians.

He added that there are Palestinian and international community fears of the next Israeli government, which is the worst government of the extreme fascist right, which threatens to take more repressive measures against the Palestinians.

Despite all the political suffering, there is a glimmer of hope for an improvement in the economic situation after the return of tourism to the city of Bethlehem.

Ministry of Tourism and  Archaeology said that tourism situation is improving after a two-year hiatus due to the Corona pandemic adding that the number of tourists who visited Palestine since the month of May reached 800,000 tourists.

Rola Maayya, Palestinian Tourism & Archaeology Minister explained that the percentage of reservations in Bethlehem hotels during the Christmas season amounted to 95 percent, adding that these percentages are encouraging with the possibility that the year 2023 will be better economically.

Foreign tourist delegations on the cradle square to participate in the celebrations expressed their pleasure at visiting Palestine and expressed hope that the situation in Palestine would improve.

Leader of a tourist delegation from Tanzania told PNN that he is happy to be in Christmas  season in the city of Bethlehem, where Christ was born, which is a wonderful thing, adding that the city is beautiful and the people are kind and that they celebrated in a happy atmosphere

The Palestinians hope and their head, Palestinian President Mahmoud Abbas, who will participate in the celebration of the glorious holidays at the midnight mass, that their message reaches the world, which is silent on the injustice they are subjected to and increases annually, will their message arrive this year.

Laila Amira : a Palestinian girl who live in the diaspora and calling for justice for her people