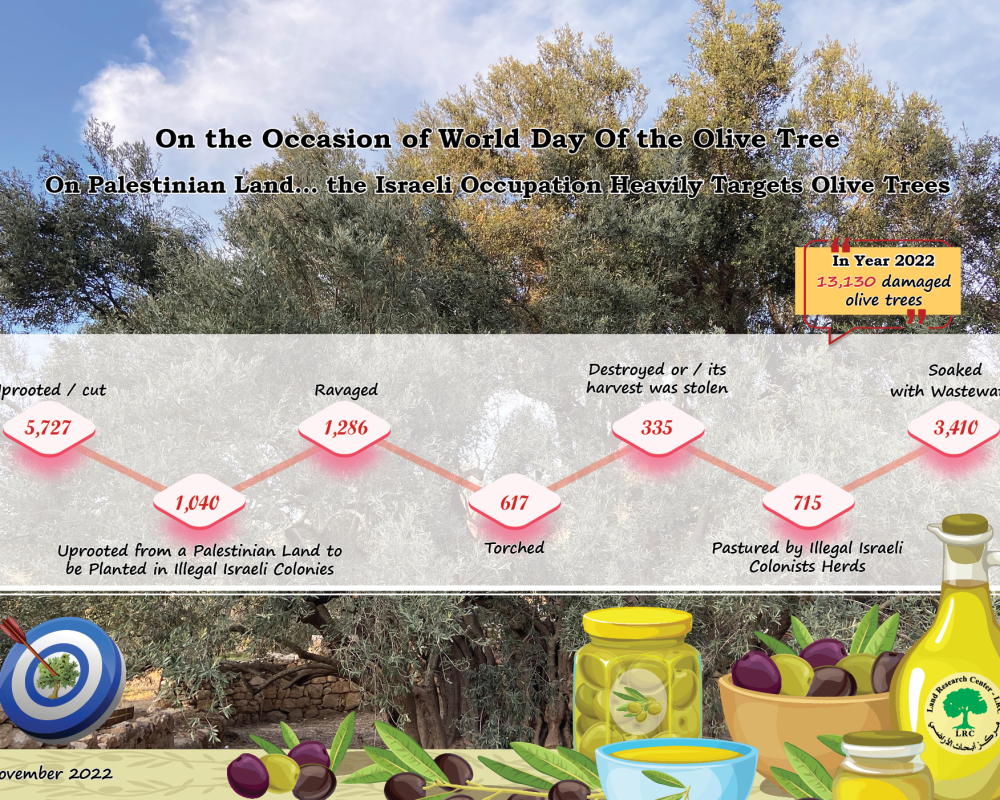 Since 2019, 26 November was officially recognized as World Olive Day by UNESCO in its 40th session.

The Palestinian Olive Tree is Known for its Significance and Popularity. The indigenous Palestinians were the first to develop Olive Tree plantation, and discovered methods to extract its oil and invest the Olive Harvest to the most of its potentials.

An Evidence of its Historical significance to this particular spot, is that Palestine Holds on its Land in Al-Walaja – south Jerusalem the eldest Olive Tree in the World - aging more than (5500) Years, and the Palestinian Rocky Mountains are full of holes that used to be olive oil mills, then the agricultural production in Palestine also discovered plantation of Grapes. Another Evidence from Palestinian Kitchen, Olive Oil and Powdered Thyme are an important addition to every Palestinian table. The Olive tree has become an important Part of our heritage and cultural identity, this tree that have been mentioned the holy Quran, is a symbol of the land Arabism, and by standing high in the land, it provides undeniable evidence on the falseness of the Occupation’s Zionist Narrative, while the olive tree branches play hymns of love and freedom.

The Israeli Occupation is pursuing its attempts to cut the ties between the Palestinian people and the Olive trees, to take away that holy bond, and facilitate confiscation of the land.

At this Occasion, We Palestinians Raise our voices to urge the world, to stop the silence and tolerance of Israeli Violations against Olive Trees – their crimes included Cutting, poisoning, Ravaging, and Uprooting the trees, which pains Palestinian People as much as their sons who fall as martyr.

During this Year, the Occupation Uprooted, torched, and soaked with waste water about 13,130 Olive tree , and since the beginning of Israeli Occupation to the Palestinian land , they destroyed about 2 million olive tree , A criminal occupation against Humanity , environment , and Environmental Justice.

We in Palestine Cultivate, blow, trim , and embrace the Olive Tree , and call for the world to protect it from the Occupation’s attempts to uproot it from its homeland.