In Gaza : facing the Israeli occupation, art as a resistance 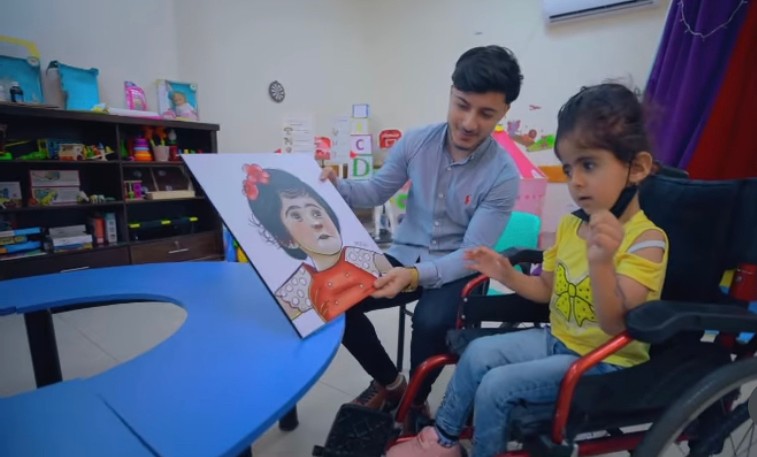 Ezz Lulu has already made the rounds of many TV shows, and yet, this artist of a new generation agreed to share with PNN why art in Gaza is an indispensable weapon for freedom of expression, and yet a peaceful one.

Now in his fourth year of medicine at the Islamic University of Gaza, the artist who goes by the name Ezz Lulu on the social media uses painting and drawing as a mean to confront the Israeli occupation and defend the rights of Palestinians in Gaza, the West Bank and all around the world. His particularity: digital painting, which he considers a way to "help express the conditions people are living in through simple drawings and paintings". However, this medical student was immersed in art from the age of 7, painting animals before tackling portraits of everyday people. His growing fame allowed him to exhibit in galleries, then to participate in live shows, during which his paintings came to life in front of a crowd of spectators.

We were not able to meet Ezz face to face, because he lives in Gaza and the borders of this territory are heavily controlled and entry requires special permits. Today, these injustices, like the permanent and daily controls at the borders as well as inside Palestine, are denounced by Izzeddin through digital painting.

"As a digital painter, I use art on the social media platform to show the suffering of the Palestinian community. It has a strong effect, people can watch and see.  I want to continue in this art, not just focusing on the suffering made by the occupation but also to send the message of Palestinian people against the injustice they are living.  To show that people from all around the world are accepting this injustice and to send a message to human rights organizations." asserts the artist.

The recent Israeli strikes in Gaza, which resulted in the deaths of dozen of citizens and several wounded, are an example of the injustice Ezz are willing to artistically denounce. "The last war in Gaza, beginning of August, it happened on Friday where people where preparing themselves to have a picnic near the sea but that Friday, was not like any other Friday because the Israeli occupation chose this day to start another aggression on Palestinian people in Gaza." Those crimes, he hopes to fight them by using digital painting, an endless art : "Child Alaa Qadoum, 5 year old, she was playing in front of your house in Al-Jabaliya, when she was shot by Israeli military air planes and she got killed, becoming martyr. It is a new war crime that Israeli committed." Five-year-old Alaa Qadoum was outside a relative’s house in the northern Gaza Strip on Friday 5th of August when an Israeli airstrike hit in the street nearby without warning, killing her. For Ezz, it is no more safe for Palestinian to live in Gaza : why should people living there be afraid that one second to another air strikes might destroy maybe their houses, but also their all life ? Through his art, he is showing the reality of the life in Gaza, under Israeli occupation : "I am trying to send a message that we are in Gaza strips, that children and women are not safe from the Israeli air strikes. Despite they are civilians and innocent, and have no relations with war, but they are not protected from those assault."

Not only in the young artist denouncing war crime, he is also fostering freedom of expression thanks to his painting. It is what he has done after the murdered of Shireen Abu Akleh, killed by Israelis bullet in Jenin while she was covering the situation as a journalist. Indeed, the Palestinian journalist are particularly targeted by Israeli police, as they represent a independent voice. According to the Palestinian Journalists Syndicate, Israel committed 66 violations against journalists in July. And this, despite the Security Council Resolution 2222 condemning all violations and abuses committed against journalists.

Ezz Lulu will keep using art as a tool of resistance against occupation, violation of human rights, and especially as a tool to reaffirm the human dignity and right of a normal life, which deserved to be respected no matter what. "Me, as a painter, I witness many crimes against the Palestinian people, not just Alaa, but a lot off losses". Having recently been chosen to be part of an European Union project for peace, Izzeddin truly hopes that "all the border will be removed and that Palestinian can go out of Gaza and send a message to the all world. I hope this injustice will end soon so that Palestinian can live their live like other people in the rest of the world”.

President Abbas : Holocaust is the most heinous crime in modern human history