678 Violations against Media Freedoms in Palestine during 2019

The Palestinian Center for Development and Media Freedoms “MADA” issued its annual report on media freedoms in Palestine during the past year 2019. It is worth mentioning that this report is part of the project “A Step Forward towards Promoting Freedom of Expression in Palestine”, supported by the European Union.

This came during a press conference held today on Watan TV, in which Dr. Ghazi Hanania, Chairman of the Board of Directors of MADA Center, Mousa Rimawi, Director General of the Center, and journalists Moath Amarneh and Christine Renawi participated in it.

At the beginning of the press conference, Rimawi greeted all journalists, especially Palestinian journalists who face the Israeli repression, to convey the reality of what is happening on the ground. Rimawi emphasized on the rejection of the so-called deal of the century, which pave the way for state of apartheid, and human rights violations in Palestine, including media and press freedoms in Palestine. Also, Rimawi welcomed again the primary efforts announced by the Palestinian government headed by Dr. Muhammad Shtayyah, which rejects the attacks and violations against journalists and against the freedoms of opinion and expression. These efforts reflected on the reality by the low number of violations in the West Bank, but the decision to block 49 sites by the Magistrate’s Court in Ramallah was a setback to freedom of expression. 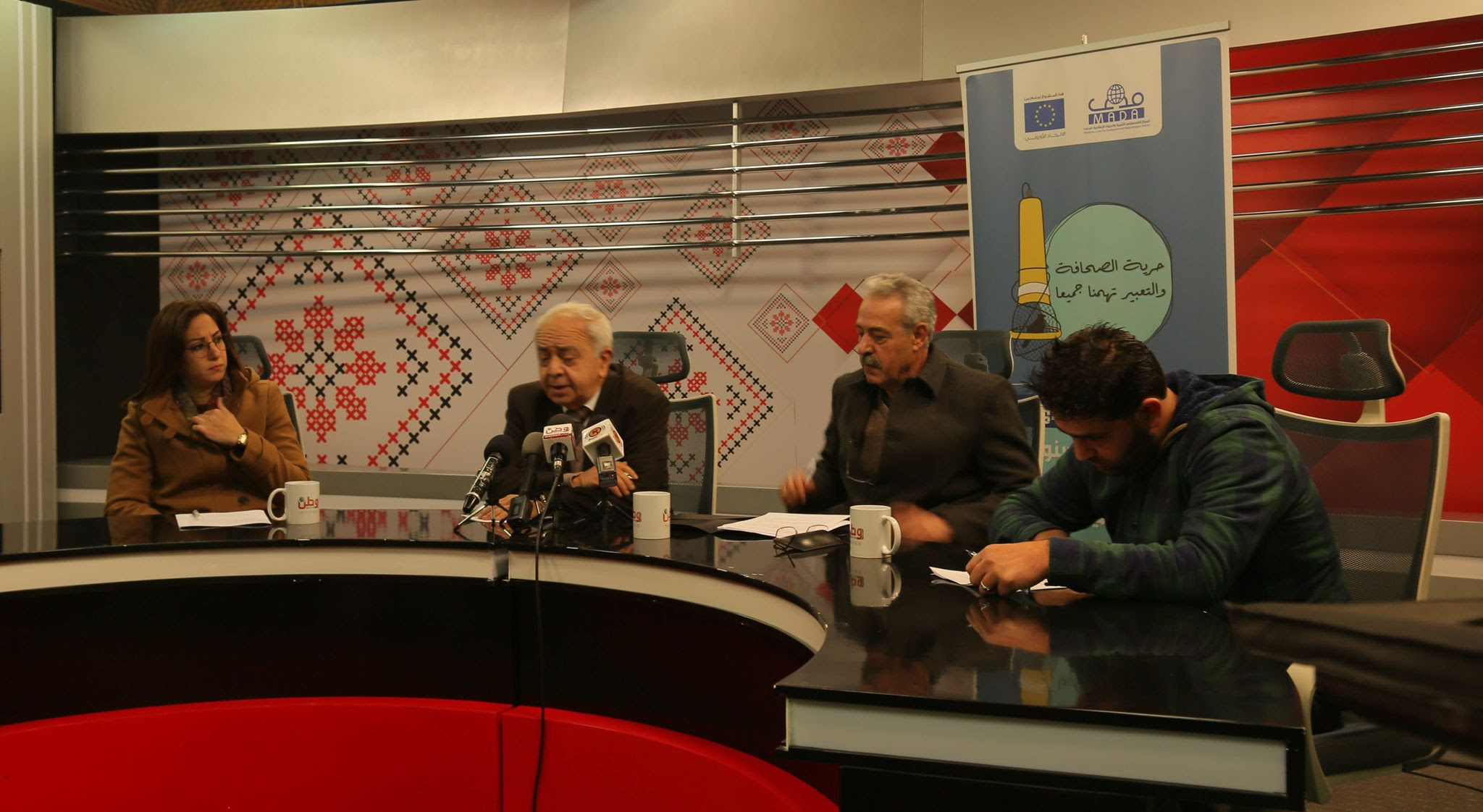 As for the journalist ChristineRinawi (palestinian TV reporter in Jerusalem)she explained how that the Israeli occupation closed Palestine TV office in Jerusalem in 20/11/2019 and prevented the journalists working in it from practicing journalism work for 6 months. Rinawi indicated that the decision to close is a political decision that comes within the systematic attack against the city of Jerusalem. Rinawi also confirmed that the occupation deals with the journalist as part of the problem because of the strongphotos they deliver and their ability to convey the truth. She also added that she had been interrogated 3 times within one day,  and the staff at the Jerusalem office was prevented from continuing to present their programs in the field, where her colleagues got arrested live and they were investigated. At the end, Rinawi indicated that no matter how the occupation forces try to obstruct the work of the Palestinian journalist, the coverage will continue because the Palestinian journalist has amessage.